Apple Releases the ability to personalize your iOS App icons

On September 18, Apple released a massive update for the iOS system for the iPhone. Apple iOS 14 brought several improvements and the one that seems to caught everyone’s attention – the ability to change the icons on your phone. The update was not incredibly forward-thinking of Apple, as android users had the system option for years. However, it’s caused a bit of a buzz online, and many designers have seen this opportunity to release a range of customer icons to personalize your device and make it more unique.

Many of these outcomes use the shortcut system which was released in the most recent iOS update. Allowing you to personalize the icons through several shortcut edits, allowing you to associate an image with that shortcut, therefore, personalizing your system. This long-winded process, nevertheless brought out some exciting creative work from designers around the world as they took up the task of personalizing the iOS system.

One of these impressive releases promoted on the BBC, in their news article: https://www.bbc.co.uk/news/technology-54387339

Interestingly the designer Traf has been producing icons for years, however with the release of iOS 14, he packaged up his designs and released it just the right time to gather some interest online from many people influential people. What are the most exciting releases was that of Traf – https://tr.af/ who with a well-timed release and a lot of traffic brought about by One famous YouTuber brought in a great deal of interest from people worldwide boosting his sales to over $100,000 in less than a week!

From the view of designers and digital product builders worldwide, this fascinating insight brought about many people trying to jump on the same bandwagon. It was all over the online articles from Creative Bloq: https://www.creativebloq.com/news/ios-14-designer-100k to Cult of Mac: https://www.cultofmac.com/723490/ios-14-iphone-home-screen-customization/ as many sought to try their hand at their custom iOS design icons.

From designers and production, digital product builders worldwide is fascinating insight brought about many people trying to jump on the same bandwagon. Traf was quick to point out –

“This title is a little misleading. Sure, it took me six days to amass 3,626 sales for a total of $101,528, but like any overnight success, it was years in the making. In my case, about seven years.”

However, as the icon designer confessed, He was just in the right place at the right time. A well-planned release and a fair amount of well-placed marketing allowed him to get in the significant presses and to market well to a broad audience.

It was One famous YouTuber who brought in a great deal of interest from people worldwide boosting his sales to over $100,000 in less than a week!

When tech vlogger MKBHD shared a YouTube video featuring his custom home screen. “The next thing I knew, I was making $28 what felt like every 28 seconds,” Traff says. “My phone turned into the ultimate dopamine dispenser (if it wasn’t already). I had to disable notifications.”

But the news picked up on the wrong aspect of the story, Traf is passionate about his craft and does consistently good work. He is honest and open and shares his process and findings.  Please read all about Traf’s journey on his blog here: https://tr.af/6. His honest approach, message to other designers and his learning from worldwide success is a fascinating insight. He says:

His approach is more likely to bring him long term fans, and followers who are genuinely interested in his journey, rather than just the latest release. His humbling and sobering statement, he is quick to highlight that doing work well, and doing work that is true to your style and audience, whilst doing good work consistently is more important than 5 seconds of fame.

How to install the custom icons in iOS 14 on an iPhone.

Find out how you can personalize your Apple device with custom icons and download the cutout effect set for use on your device. Follow the instructions below, and you too can create a cutout effect on your iPhone device.

Here is our how-to guide to edit and create shortcuts which work as your icons on your device. This process is a little bit clunky compare to an android system; however, it allows for the customer comes to be shown through a series of shortcuts. Allow you to hide the original icons and use these instead. Coupled with a custom background, you then have a custom system design.

With this release, we decided to try out a few icon designs of ourselves. Using our own cut out illustration style of the Incision font from our collection. And on the following link, you can get our range of hand-cut icon designs for a limited time for $5.00! The set below allows for a cutout shape perfect for iOS for you to download for free! Personalize your phone, with these Hand Cut out affect icon set for iOS 14.

iOS 14 Handcut Icons to customize your device – For a Limited time only $5.00!

We have created a simple iOS icon set made for iOS 14 with over 105 icons for major apps in a handmade cutout style.

Change up the look of your iPhone, using an iOS 14 icon set is a cool way to do it. You can replace all your favourite app icons with custom ones that have a consistent look and feel. In iOS 14, Apple introduced the Shortcuts app to the iPhone and iOS devices. It is allowing you to apply custom icons to your apps.

Instructions are included on how to add to your device, and set each icon shortcut, along with: 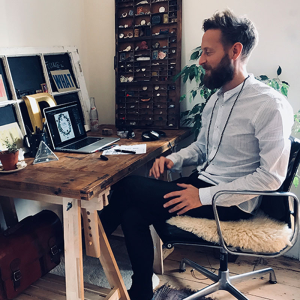 Matt Rowan is a Designer based in the UK. With a passion for design, creativity and typography.
He has been working with clients big and small, creating Fonts, Identities and Brands for the past 15 years.
He is proud to support the companies he works with and see them develop and grow. Helping them understand who their client is and how to best speak to them.
Check out his portfolio and get in touch if you can see where he can work with you. From anything from web design, identity design through to for branding solutions and custom typefaces to help you stand out.

Matt Rowan is a Graphic Designer and Web Designer based in the UK. Read about him, and his design work at craftgraphic.com

Matt works with a wide variety of companies from start-ups through to medium and large size companies to support their branding and identity work. Our work has included customer type places for brands which have featured in a wide variety of formats from TV & film through to packaging and print.
Creativity is key to our work, but so is understanding the real problem I understand underlies the project. Every project starts with a conversation about how we can help where you want to be as a company.

Covid has postponed many events, meetings face-to-face and networking opportunities in 2020. Although business cards may seem outmoded and outdated,…

10 Key Elements of a Successful About Us page

10 Key Elements of a Successful About Us page The About us Page is regularly overlooked, however, your About Us…

Look around the web at company website content, and there is a common theme in the writing:  We are this,…

Your Target Audience is not Everyone

Your Target Audience is not Everyone One of the most important areas of your business is understanding your target audience.…